Dussehra is an important festival of Hindus which is celebrated with delight in all over India. It is organized on the Dasami date according to the Hindu Calander of the Shukla Paksha of Ashwin Mas. Lord Rama had killed Ravana on this day and Goddess Durga had conquered Mahishasur after the war of nine nights and ten days. Dussehra is celebrated as the victory of truth on the evil. Hence it is also known as Vijaya Dashmi. 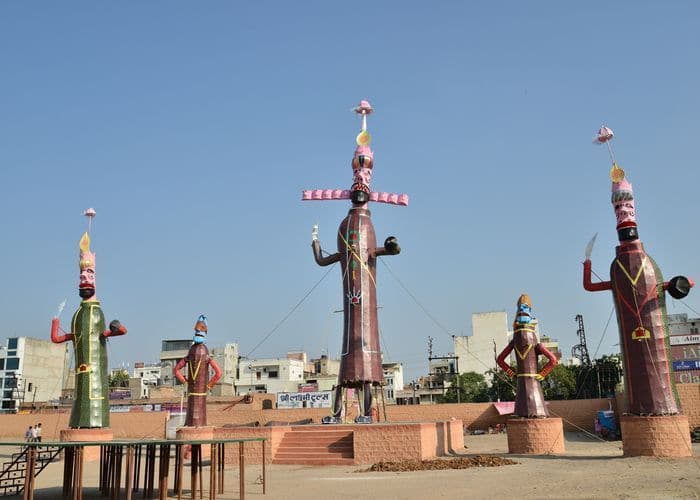 Dussehra is considered to be one of the three very auspicious places of the year. On this day people worship arms, vehicles, and books. It is believed that there is a success in the work initiated on the day of Dussehra.

Therefore, to start any new work, it is started on this day. In ancient times, the king used to pray for victory on this day and came out for war. Maratha Ratna Shivaji also defended the Hindu religion on this day against Aurangzeb. (Essay on Dussehra in Hindi) To celebrate the Dussehra festival, big fairs are organized in place. Here people come with their family, friends and enjoy the fair under the open sky. Various types of items, bangles, toys, and clothes are sold at the fair. Along with this, the food is also full of recipes.

Ramlila is also organized at this time. On this day, the effigies of Ravana, his brother Kumbhakarna and Meghnad are burnt. Artists take on the form of Rama, Sita, and Lakshman and they kill these effigies with the arrow of fire. The effigies are full of firecrackers and they start to burn after the fire starts. The firecrackers in them begin to burst and end them. This festival symbolizes the victory of good over evil.

There are beautiful statues of ladies set up. Goddesses Durga is worshipped for four days of Saptami, Ashtami, Navami, and Dashami. Of these, special worship is done on the Dasami day. Ladies offer vermilion to the goddess and play each other with vermilion.

In Tamil Nadu, Andhra Pradesh and Karnataka, Dussehra last nine days, in which worship of Goddess Lakshmi, Saraswati and Durga are performed. Dussehra festival is celebrated by Gujarat Garba Dance in Gujarat.

In this, the virgin girls dance with a colorful pitcher on the head. Goddesses Durga is dedicated to Navratri in nine days before Dussehra in Maharashtra. In Kashmir, the first nine days of Dusshera is the tradition of fasting only by drinking water. There is also a cultural aspect of Dussehra. India is a farming country. When a farmer brings a grain of Rupees to his farm by cultivating a golden crop on his farm, his happiness is not adequate.

Dussehra is a festival of bliss and it fills us with renewed enthusiasm for life.

If you have any query related to Essay On Dussehra For Class 4, you can ask your query in the comments section below.