we try to keep our India clean it will become green that is if we clean our environment and surroundings then we will get a good surrounding of greenery like trees and grass and various small plants etc.

The main mission of clean India Green India is to stop the deforestation and increase the number of trees in India to decrease the pollution as the trees help in reducing pollution.

Clean India Green India is all about making them wear green by increasing the natural environment by reducing the cutting of tree that is lesser use of raw material from the forest and increasing the number of Trees by growing small plants. The clean India Green India was a theme of Indian government calendar which was launched on 2nd October on Wednesday launched by the Minister Arun Jaitley.

This mission was launched in the way between the two government programs the swachh Bharat Abhiyan and digital India.

The clean India Green India theme is devoted to the governments swachh Bharat Abhiyan in the calendar which has the first picture of Prime Minister Narendra Modi with a Broom in his hand to clean.

According to Minister Jaitley whoever, she is the calendar he will get the message of swachh Bharat Abhiyan to contribute to this campaign by helping in keeping the environment clean. The clean India Green India as the main focus on making the India green, which means increasing the greenery in India by an increase in some forest cover or agricultural land or the population of small plants.

The combination of clean India and green India makes the perfect and developing moment of India. Making the India clean and green also helps in reducing the Global Warming 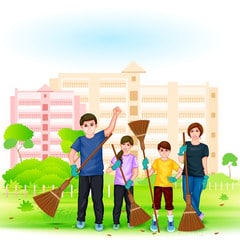 Clean India and green India have various effects on the development of India. People have taken seriously about the cleanliness of India, and they clean the environment every day and also dispose the garbage in a correct manner, and also they have taken the Global Warming as a serious problem and also started growing plants and trees around them to prevent relation from global warming as the trees helps to overcome the number of greenhouse gases in the air.

There are various development in the forest cover and also increase the number of trees in the cities to fight against the various environmental problems.

For any other queries about Essay On Clean India Green India, you can leave your queries below in the comment box.